In the previous classes 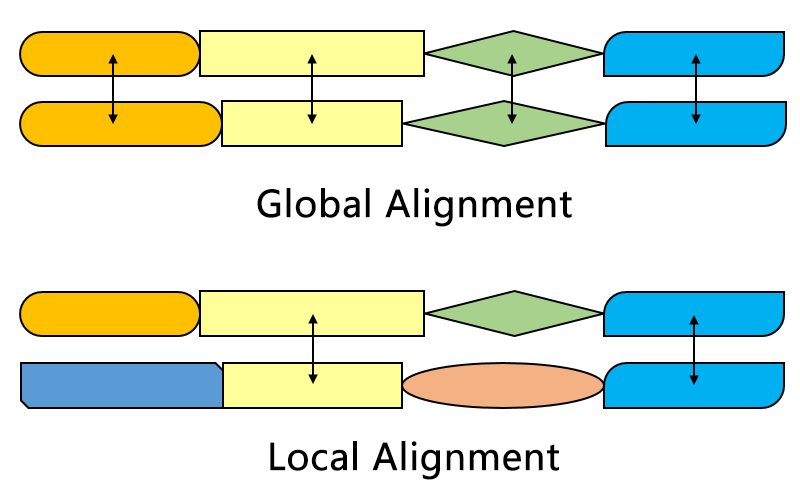 Part of query to part of subject

We have two alignments

External gaps do not count

Here there is no alignment

Two ungapped alignments, or one gapped

If the distance is 0, then the two sequences are identical

If the distance is small, the two sequences are similar

If the distance is big, the sequences are different

Local alignment is not a distance

Since external gaps do not count, we can always use them

In this case the smallest distance is always 0

The smallest cost is achieved taking one letter

(it is not a minimization problem)

Score instead of distance

Instead of finding a minimum, we look for a maximum

The philosophy is the same, but we look for big numbers instead of small numbers

Initially there is no difference in the resulting alignment, but later it will be important.

We look for the Optimal Alignment

Now we put positive or negative numbers, depending of single-letter scores

We can find optimal alignment efficiently

Once the “dot plot matrix” is complete, it is easy to find the optimal score

We have three options as before, but not negative values

We prefer this alignment

instead of this other alignment

Thus, gap penalty must be greater than mismatch penalty

Long gaps instead of short ones

We prefer this alignment

instead of this other alignment

We want few long gaps instead of many short gaps

We observe that, once an indel event starts, it can easily grow

If the polymerase jumps, then it can jump a long distance

To represent this, we use affine gaps

So far we considered only linear gaps

Now we consider affine gaps, where the first gap is expensive, but the consecutive are cheap

\(I\) is the initial gap penalty, \(E\) is the gap extension penalty

After we built the matrix, we must go back from the “optimal score” finding which was the path

There may be more than one solution

Some programs build the alignment at the same time they build the matrix, but that requires more memory 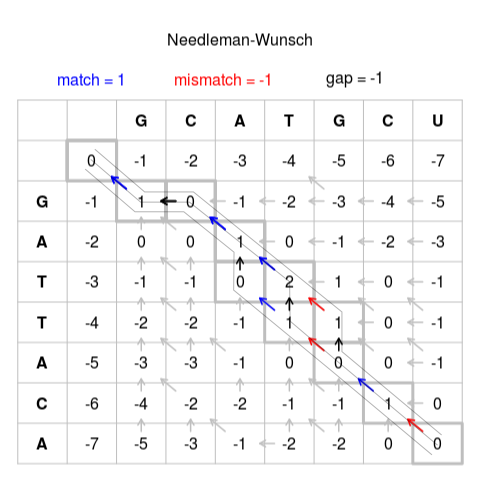 If mismatches and gaps have different cost, the score will change

Therefore alignments are meaningless without knowing the scoring matrices

What is the best score?

How big is big enough?

We need to make several hypothesis

The most common hypothesis is statistical

A hit is a subject with score over a threshold

We can estimate the number of hits in a given database, assuming randomness

That is called Expected value

Expected value as a threshold

In practice, we choose a small Expected value

E-value depends on the database

The formula for E-value depends on

Use the smallest relevant database